Recalculated, Redesigned, and Rereleased for 2022 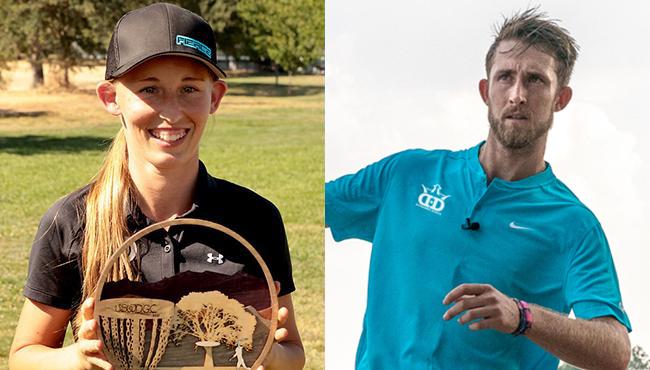 Paige Pierce and Ricky Wysocki top the U.S. Tour Rankings - a precursor to the return of the updated PDGA World Rankings.

After a two-year pause, the official PDGA World Rankings will restart in 2022 in phases.

Drawing on valuable input from stakeholders, including the PDGA Pro Tour Players’ Committee and the Disc Golf Pro Tour, the metrics for calculating the rankings have been refined to produce the best gauge of consistently excellent performance on the sport’s largest stages.

Initially, a U.S. Tour Ranking will be released, based on the results of U.S.-based majors and elite series events. As pandemic-related travel restrictions relax in Europe allowing for the resumption of that professional tour, a European Tour Ranking will be published.

These rankings will be unified into a single World Rankings as soon as professional disc golfers from around the world return to more-frequent, direct competition.

When the year-end PDGA World Rankings were published at the close of the 2019 tour season, no one expected those would be the last rankings released for more than two years. Just a few months later, the coronavirus pandemic would interrupt one of the early pro tour events of 2020, leading to the cancellation of a significant portion of the 2020 season, including Pro Worlds. Even as professional disc golf returned to the U.S. later in 2020 and in 2021, COVID-related travel restrictions in Europe prevented most European players from playing elite series events whether those events were in Europe or the U.S.

Although the World Rankings are an important point of recognition for professional players, and an informative and entertaining aspect of following the game for fans, it has been difficult to calculate an update to the World Rankings that would be fair and completely inclusive of top disc golfers from around the globe.

Thankfully, pandemic-related restrictions on events and travel are trending in the right direction for the world’s best disc golfers to more easily gather together and compete in 2022.

The PDGA oversees a sport that continues to evolve. As disc golf’s global governing body, the PDGA frequently reviews policies and products to ensure they remain applicable and relevant to members, competitors and followers. The World Rankings are no exception, and the formula for calculating the rankings has been reviewed and altered as-needed over the years.

The PDGA World Rankings have always relied on a relatively straightforward set of metrics. During the interim caused by the pandemic, the PDGA sought to refine the World Rankings in order to make them even more intuitive – easy to explain and understand. The PDGA also wanted a ranking system that emphasized and rewarded certain key achievements. Finally, the rankings needed to be free of volatility – rewarding players for consistently great performances and not overly penalizing players for the rare, outlying, “off” round.

As the PDGA team identified and tested changes to the World Rankings, several vital stakeholders were approached for buy-in. The PDGA’s Pro Tour Players’ Committee was given the opportunity to review the rankings system, to ensure a system wherein players can easily understand how their week-to-week performance influences their longer-term standing amongst their peers.

“I’m happy with it. I think with the added additions of the top tens and the other things, it will give the players something to strive for. Rankings, in my opinion, hold so much more value than other things that disc golf has used as a measure of skill level,” said Paul Ulibarri, committee chair.

Additionally, the Disc Golf Pro Tour – the official pro tour of the PDGA – was presented with the updated rankings system to ensure the new rankings would be an easy-to-communicate and exciting race to follow, via channels like the Disc Golf Network, throughout the DGPT season.

The redesigned PDGA World Rankings focus on several key input categories during a rolling window of the previous calendar year:

Majors - A player’s performance at disc golf’s most important events merits its importance as a stand-alone factor in the World Rankings formula. The player’s overall finishing position at each US-based Major is also a category ranking. (E.g. A first-place finish is a “1” ranking for that category.) A player who misses the event or finishes below the cut line is credited with a “missed cut” – for calculation purposes this is recorded as a finishing position of the cut line plus one. Additionally, when a tour includes 3+ Majors, a missed Major will be dropped, or if the player plays all the Majors, the worst result will be dropped.

Wins+ - A player’s results for wins, podium finishes (i.e. top three) and top 10 (top 5 for FPO) finishes is tallied from majors as well as previously identified Elite Series events. The player with the most wins, for example, receives a category ranking of “1,” etc.

Rating - A player’s average rating – only in rounds played at Majors and previously described Elite Series events – contributes an input value, as the player with the highest rating is ranked 1st in this category and so on.

In the expanded rankings, the columns are the input categories. The second row are the category results and the top row is that player’s ranking, among his or her peers, in that category.

Based on the entire 2021 season, Ricky Wysocki is ranked first in the initial MPO U.S. Tour Rankings. 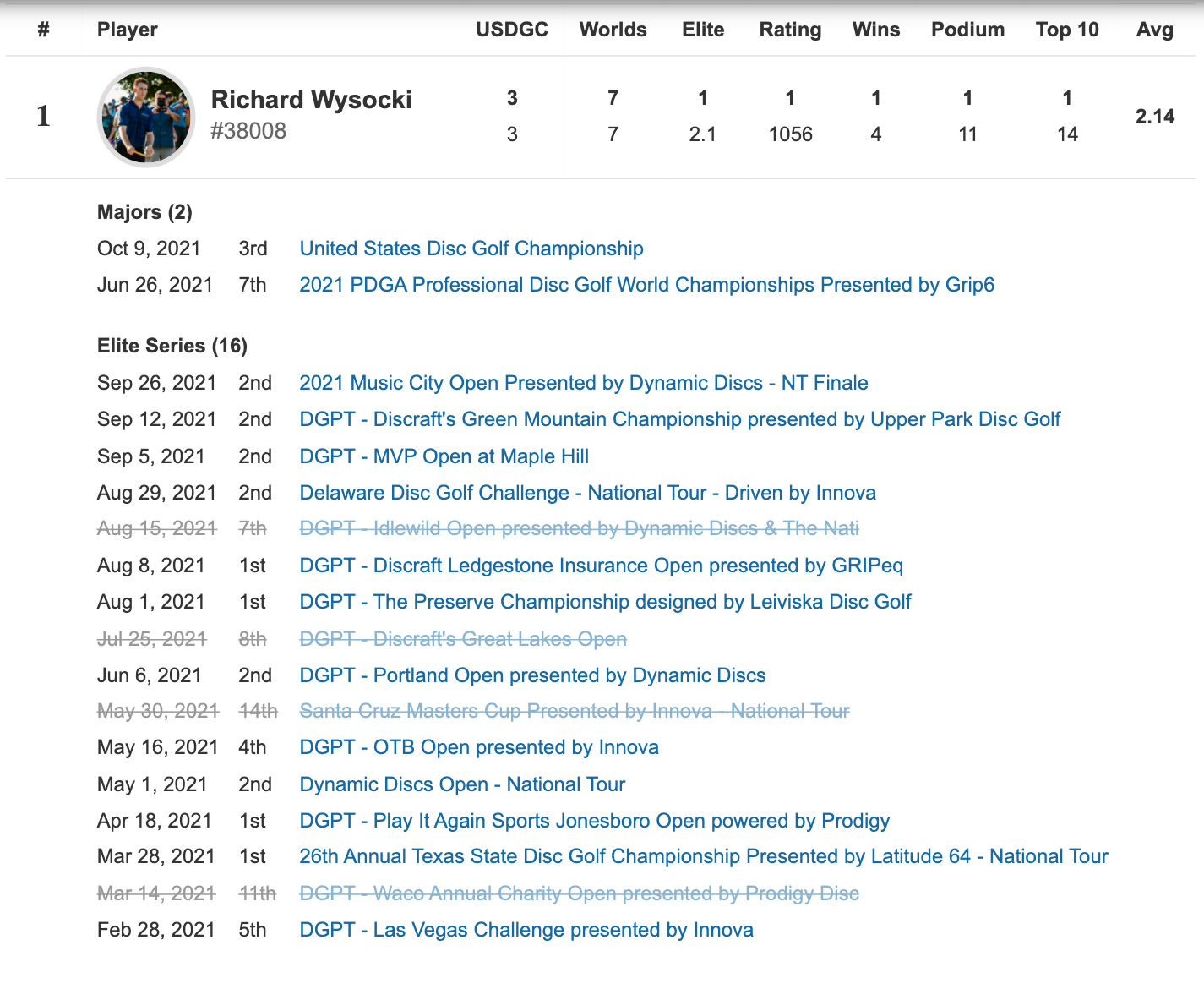 In 2021, Ricky received a “3” for his finish at USDGC, as well as a “7” at Worlds. These results (second row) are also his ranking in those categories (bold, first row). His average finish at his 12 best DGPT/National Tour events within the past calendar year events was 2.1, which was best for a category ranking of “1.” Ricky’s 4 DGPT/National Tour wins was also best – so Ricky is ranked “1” in this category. His podium finishes and top 10 finishes earned inputs of “1” as well, and his final average round rating of 1056 in Majors plus his best Elite Series events was tops in the MPO field. Added and averaged, Ricky’s final score of 2.14 was lowest, giving him the number one ranking in this initial release.

During the course of the rolling yearlong rankings window, a player may experience an uncharacteristically poor performance, may miss an event, or may not tally a result within one of the ranking categories (E.g., the player may not record a win). Thanks to a few simple scoring “rules” that player will receive an accurate overall ranking.

In 2021, Cale Leiviska played in fewer events than some of his competitors, but his finishes were consistently good. His category result for average Elite Series finish incorporates a small "penalty" because he played in fewer than eight tournaments. He did not compete at USDGC, so Cale receives the same result as other players that missed the event or participated but missed the cut – here the cut +1 input is “42.” Cale also did not record a win in 2021. Only 11 players recorded a win in Majors and Elite Series events within the past calendar year, so all other competitors, including Cale, receive an input of “12” for this category. All of Cale’s other category results (second row) and the ranking of those results (bold, first row) are straightforward. The top row is averaged, and Cale’s final score of 21 gives him an overall ranking of 18 – which is an accurate placement relative to his peers despite his more limited schedule.

Initially, the new rankings formula will be applied to events held in the U.S., while players and fans collectively wait for a more universal return of pro tour disc golf across Europe. Therefore, these rankings will utilize only tournament results from the DGPT and U.S.-located majors. However, ALL players are eligible to play in these events – the “U.S.” designation refers to the tour, not the individual player’s nationality.

The “preseason” U.S. Tour Rankings apply the updated World Rankings formula to 2021 majors and Elite Series results. (Note: Elite Series results included those from PDGA National Tour events in 2021. With the DGPT now the official pro tour of the PDGA, its tournament schedule comprises the Elite Series for the U.S. pro tour.)

See the initial, 2022 MPO and FPO Top 25 and the expanded rankings for the U.S. Tour

Both rankings will be maintained and updated for a period of time, and it may be possible for an individual player to be featured on both lists if they are able to compete in events from both tours. Ranking updates can be expected immediately after major events as well as several more times throughout the season.

Ultimately, when more pro players from around the globe are able to more frequently meet and compete directly with one another, regardless of the geographic location of the event, the ranking formula will be modified to apply globally and the two rankings lists will be replaced with the return of the official PDGA World Rankings.